Let’s establish one thing – coats do things to me. Good menswear coats, tailored, with a perfect cut and a flawless fit, give me chills and make me sigh like a twelve-year-old schoolgirl staring longingly at her older-boy crush. 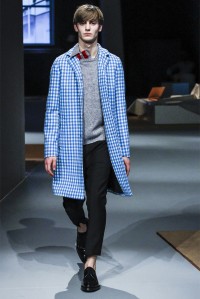 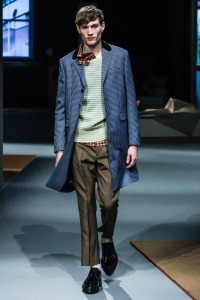 After the overload of bright prints and early 20th century elegance from last year’s F/W collection, Prada seems to have decided on a return to minimalism and structure not only for the women, but also the men. There was so much, yet so little, and each coat (there were many) was a statement, a character in itself.

(Yes, I know there is more than just coats, but I’ll get to that in a second) 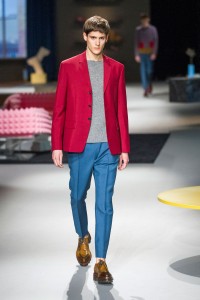 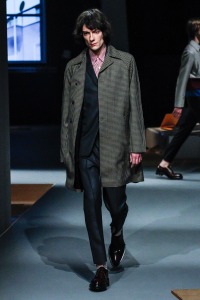 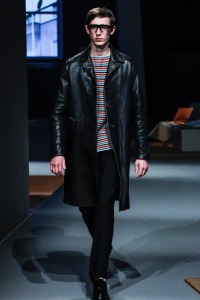 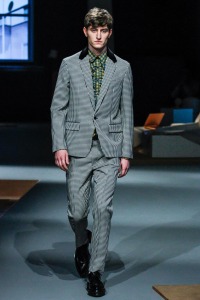 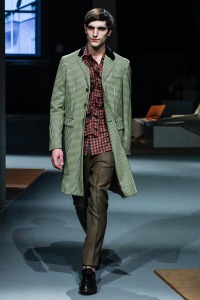 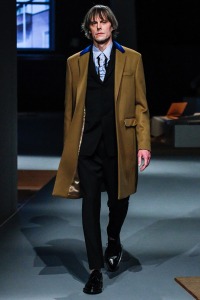 In a time when everyone is trying to innovate and create a new style that defines our era, we are either thrown back into historical inspiration or pushed forward into some sort of crazy, unwearable futurism that is more of a sculpture than a piece of clothing (that is what couture is for, yet couture is a dying art). It is especially hard to find a balance between practicality and innovation in menswear, where there is still the very traditional mindset of ‘the suit’, something I’ve talked before on my Etro post. It is my personal opinion that Prada has achieved this balance.

What pleased me the most about this collection is that it is everything while being nothing at all. I was actually confused watching the runway show, as I wasn’t sure exactly what I was getting; it took me a lot of thinking and rewatching to realize the actual genius behind it. There are several things about it, inspirations you might call them, that are fairly easy to spot – the 1960s, Andy Warhol and The Beatles, a strong hint of futurism and a nod to the English schoolboy look (pale faces, floppy hair and crumpled shirts under coloured jumpers). The historical nods, while obvious, are expertly paired with an almost obscene attention to cut, fit and structure. The past is mixed with the future in a way that changes constantly, going from Throwback Thursday long, weathered leather coats to asymmetrical checkered shirts in soft colours and architectural jackets sent back in time from sometime around 2035.

It’s not crazy, but it’s not boring; it’s wearable, but it’s still uncommon. It is innovative without stepping completely outside the box and is not aimed at a specific type of man – exemplified by the models, a mix of miserable-looking teenagers with someone who looked like Warhol’s long lost twin and other older men. It is not your everyday collection yet it is aimed at the everyman. Why? Because it has its own personality. It doesn’t borrow it. It’s a collection that probably spent a lot of time cooped up in its room in its teens, listening to Velvet Underground and reading about modern art, and matured into something responsible, stable, reliable, but with a whole lot of edge. The bright blazers, camel coats, chunky shoes, dishevelled hair and half-goggle, half-nerdy glasses create a perfect mix of past and future – something that, ironically, ends up describing the present.

I will marry this coat… 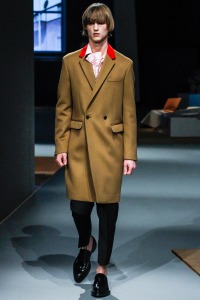 … and then cheat on it with this one.

It is accurate, precise, clinical. It is past and future but it is now, it’s what is happening in the schools and at the conference tables. It is a telling of the gradual passage from boy to man and how one can mature without changing at the core. The architectural fit and cut is softened by muted camel tones, while the comfortable-looking jumpers are presented in neon red and electric blue. The balance is achieved to a T, through a completely new way – not by using neutrals, but by using extremes that neutralize each other.